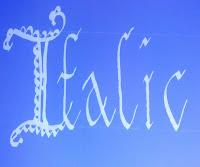 Italic style fonts are a very distinguished and popular style and used widely, for example in wedding invitations, place labels and in many other ways.  This style of oblique italic font; is characterized by its sloping cursive appearance and quite narrow letters.  The letters slope to a slight incline, about 5 degrees but you can write the letters in an upright position if you wish. 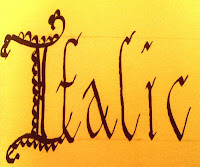 angle.  The Serifs can be written in an acute sharpness or a tight curve at the beginning and end of the strokes of the calligraphy pen.

Italic letters are normally narrower than the standard letters of, for example, the Roman styles.  You can experiment writing italic letters in different widths or quite narrow if you wish.  The narrow letter forms can be compressed quite thinly, in which case the letters would look better standing more upright.

To avoid repetition, you can experiment writing the ascenders and descender styles with swirls and fancy strokes. 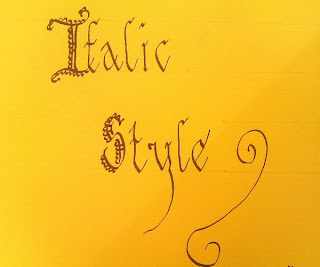 There are many variations of Italic style calligraphy that can look elegant and pleasing, for example:

Copperplate Calligraphy – a traditional handwriting looking calligraphy style with swirls and hooks and the strokes have different strengths depending on the pen strokes.  The strokes of the calligraphy nib should flow smoothly on the paper.

Curled Italic Calligraphy - The Serifs are longer and fancy with more curly fonts and swirls on the ascender and descender parts of the letters.  Classic Italic Style – This style is more oblique than usual and traditional looking.

You can choose to have a more ‘open style’ i.e. wider spaces between words and letters if you wish but they need to be kept consistent.

Getting the spaces between letters and words correct and looking good is a challenge, especially for a beginner.  With the italic calligraphy, it can be unforgiving if you get the spacing wrong and it will show up.  Theoretically, if you write each letter with exactly the same spaces in between, it would look wrong and uneven.  You have to bear in mind that letters are a mixture of lines and curves.  If you have two curved letters together, the spaces between the letters need to be less than two straight letters sitting together.  Basically, the spaces have to look right.  Use Artist’s licence rather than the ruler.