Letterforms and writing calligraphy can be very versatile.  You can experiment with various shapes, letter spacing, sloping letters, textures and the weight of letters to create all sorts of effects. 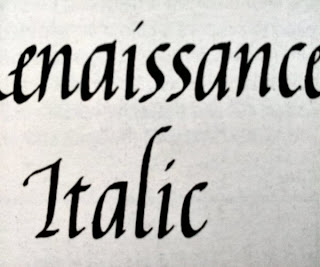 You can expand or compress the letters and the spacing between letters to give an appearance of dense space or wide, spaced out letters.  Sharpened letters such as Italic styles are an example of narrow, compressed styles.  With a more open and rounded styles, the Roman or Foundation Hand has large, bold letters with big spaces in between.  As a rule of thumb, narrow letters have narrow letter spacing between them and large, rounded letters have larger spaces between them.  However, rules can be broken and you can mix and match with lettering styles and spaces between letters.

You can experiment with different angles and widths of letters forms to create different effects and textures.

As a general rule for spacing between words is to make the space the width of a letter ‘n’.  Line spacing can be either closely-knit or wide apart to give an open appearance.  Examples are, compressed and sharpened, such as italic calligraphy styles.  Using heavy, broad calligraphy styles would give the effect of a dense style.  The paper underneath would hardly show because the letters are thick and broad.

Using finer lettering styles, there would be more spaces and the background paper would show much more.  The spaces between the letters and words are known as negative space.

A Closer Look At Different Line Spacing And Letterforms

This style is called Times New Roman with thin letters that are compressed in appearance.  The spaces between the letters and words are narrow and small and the letters themselves are tall and thin.