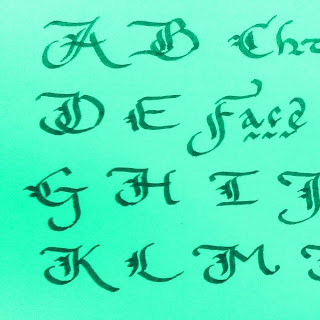 Have you ever wondered where the origins of calligraphy came from, and why choose calligraphy as a leisure pursuit? We may live in a hi-tech world, but making and doing things by hand is still a very popular hobby for many people.  People love being creative and original and the upsurge of calligraphy writing has reflected this.  People often report feeling great satisfaction from creating something from hand, or learning a new skill.  Calligraphy is a great past time and is so easy to learn.

From cave men and painted symbols, to hieroglyphics in Egyptian times, to the modern alphabet, calligraphy has always been part of everyday life and it has a complex and vast history.  Many years ago, symbols and letters used to be carved onto stone or clay tablets, and then written on animal skins, and eventually on papyrus paper.  Many mediums were used, such as dye and inks.

The Roman Era and Calligraphy

Calligraphy Styles Through The Ages
During the Middle Ages, Christian and Gospel scripts became very influential, for example, the famous Book of Kells, with its beautiful writing and vibrant, illuminating colors. During the 20th Century, Edward Johnston resurrected calligraphy, introducing the Foundation Hand.  This style is very popular and is used frequently.

Writing styles changed gradually from the old styles to the pointed Gothic styles.  Italic styles came later on, which became a great influence to calligraphy styles today.  Copperplate styles were born from the Italic styles.

Modern calligraphy has been heavily influenced by the old historic styles through the ages.  During the 1960s, a renewed interest in calligraphy spread from England to America and then spread to many other parts of the world.  This has resulted in new interest from globally, and some new rich, cultural and diverse styles were created from the older styles.  Original ideas have surfaced and there is a renewed and increased interest today.
Posted by Unknown at 12:34